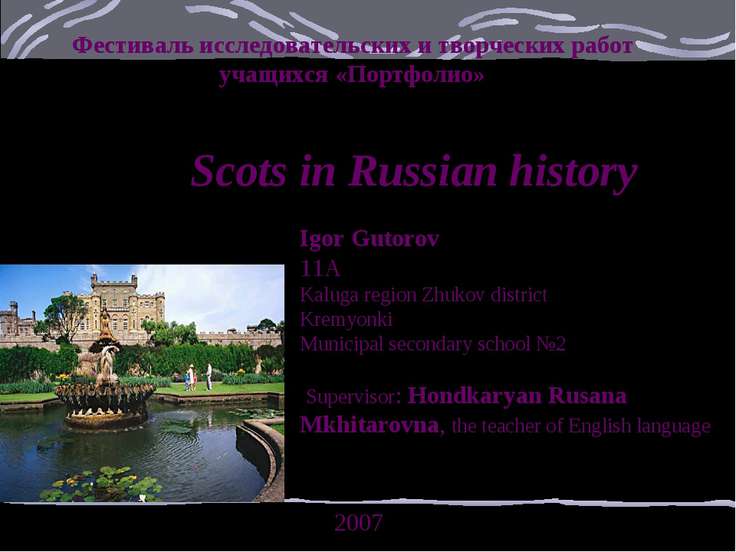 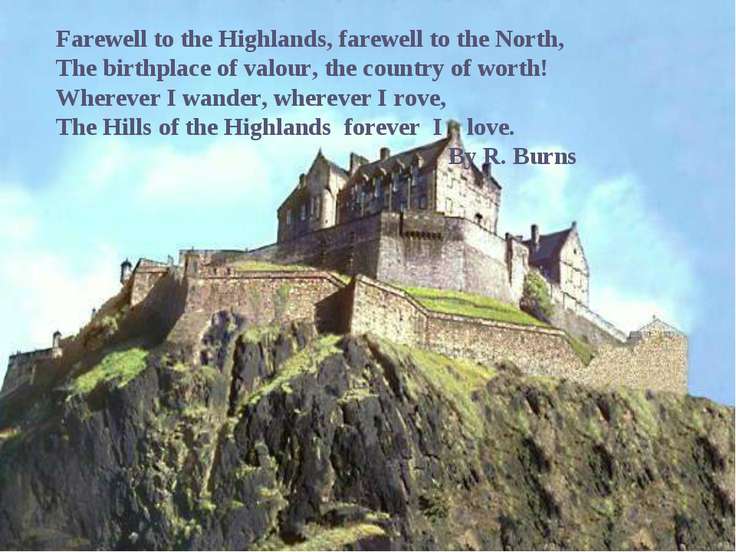 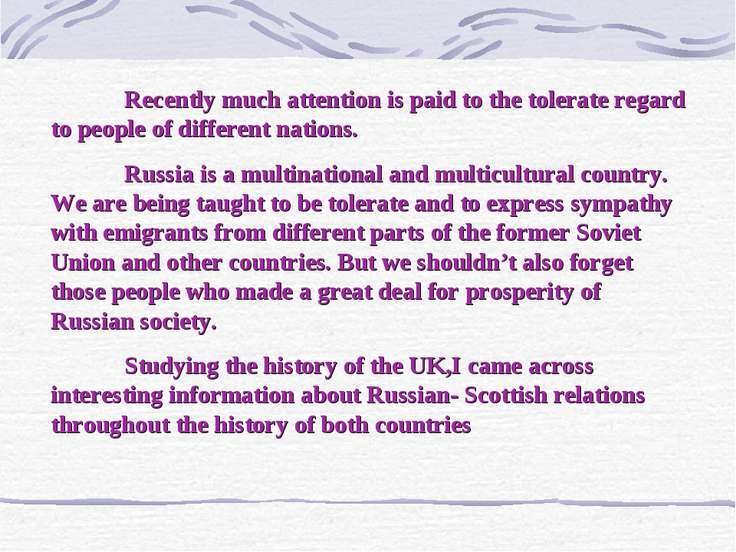 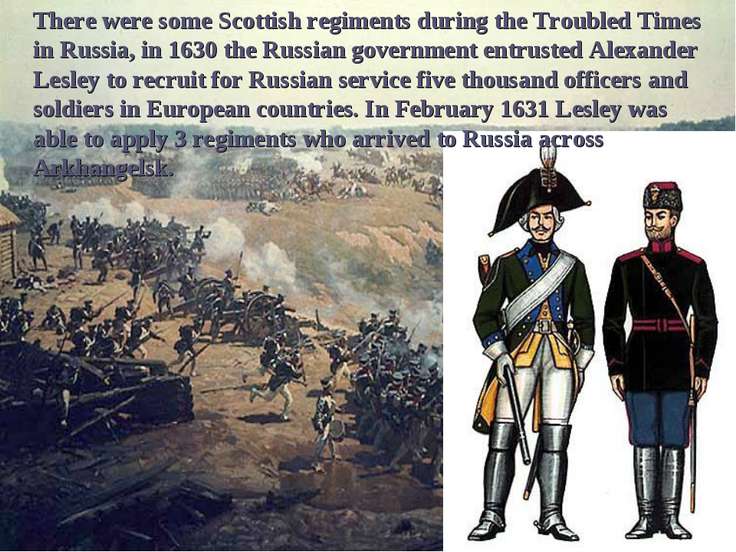 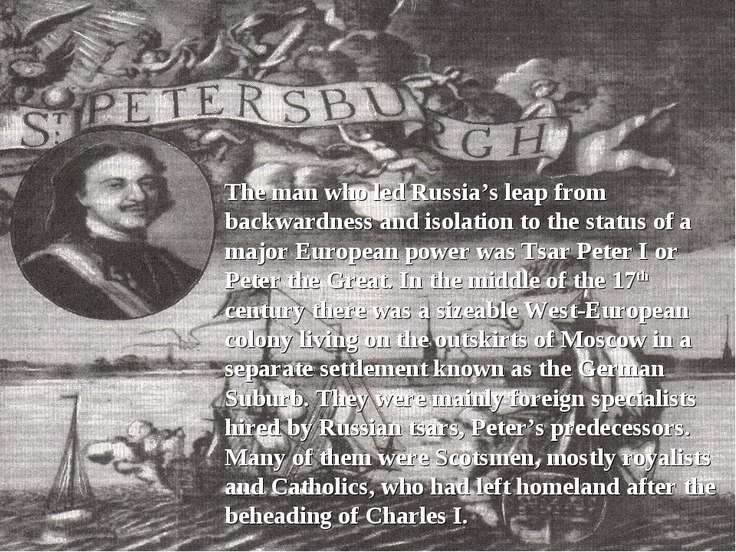 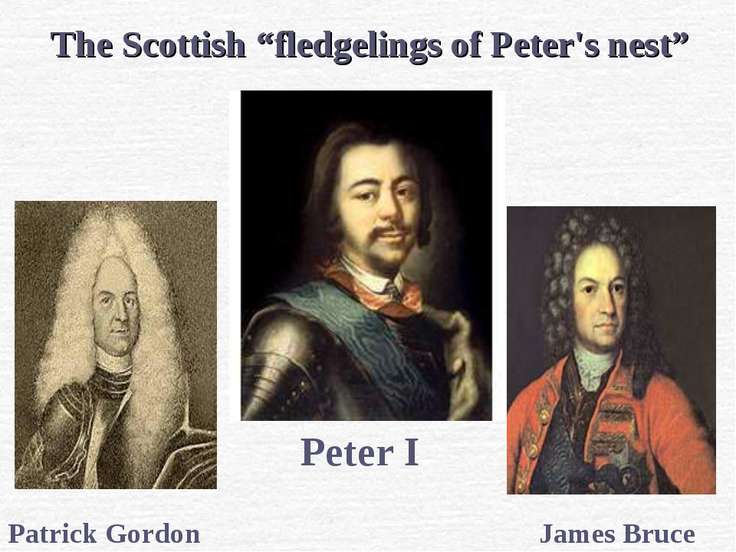 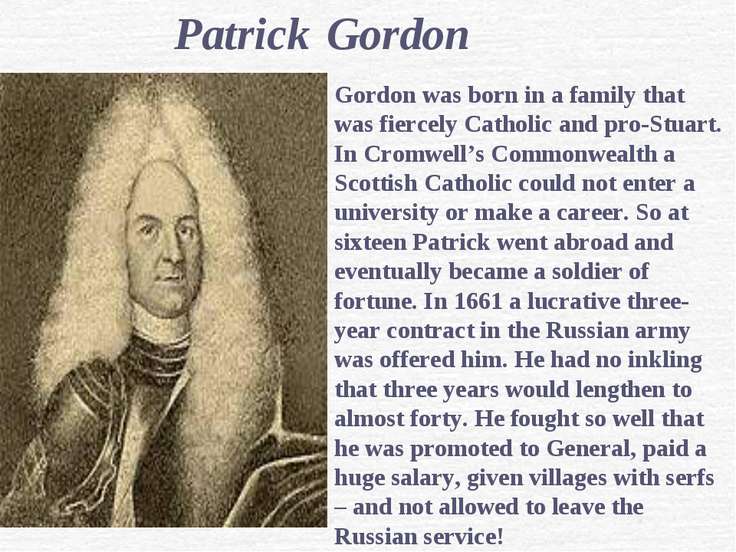 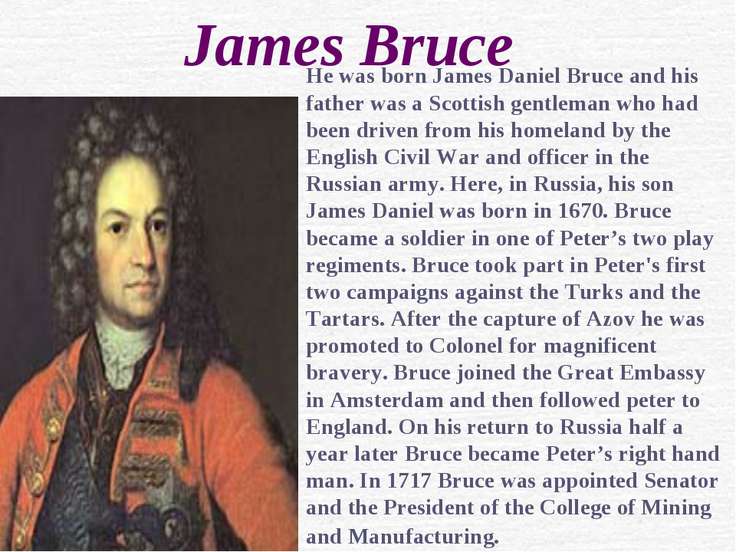 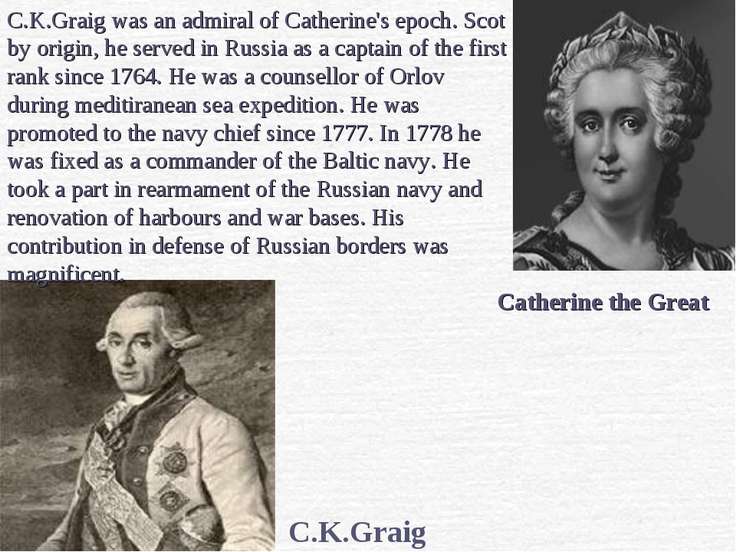 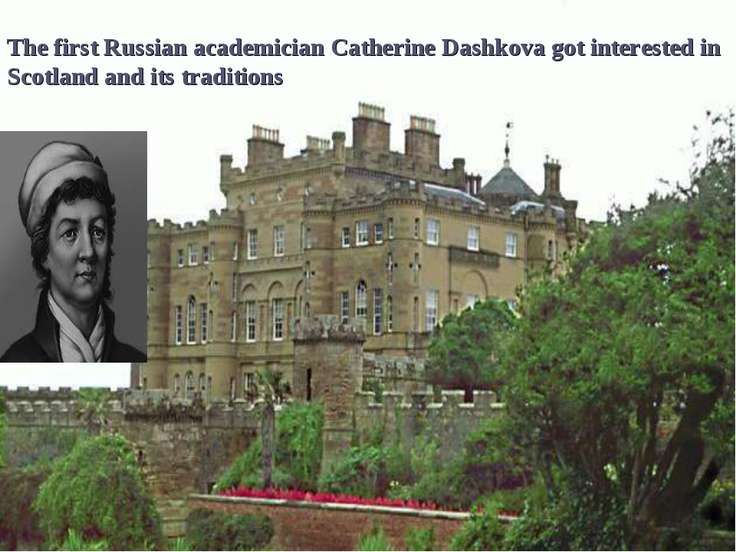 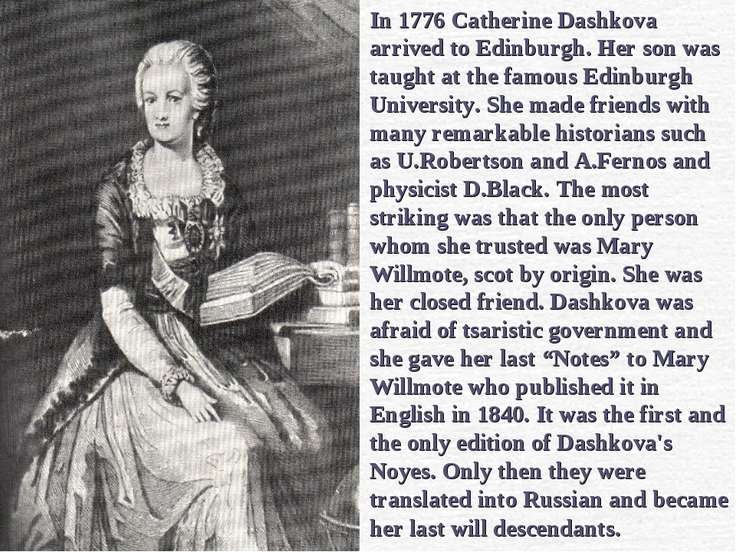 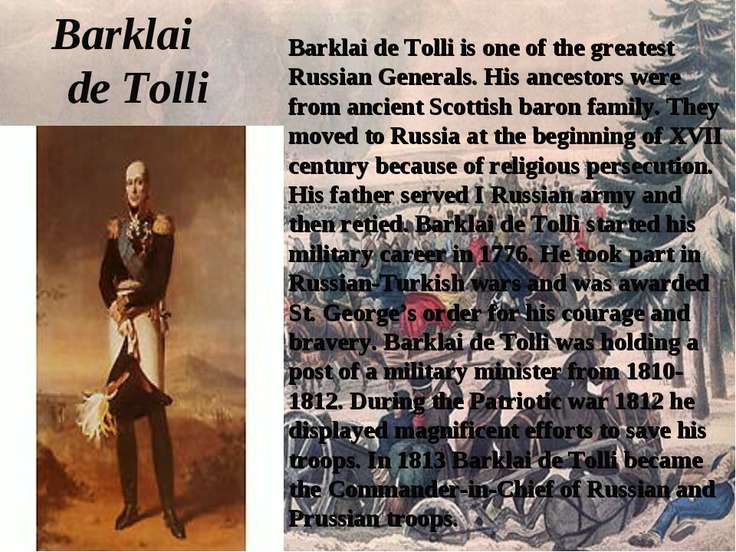 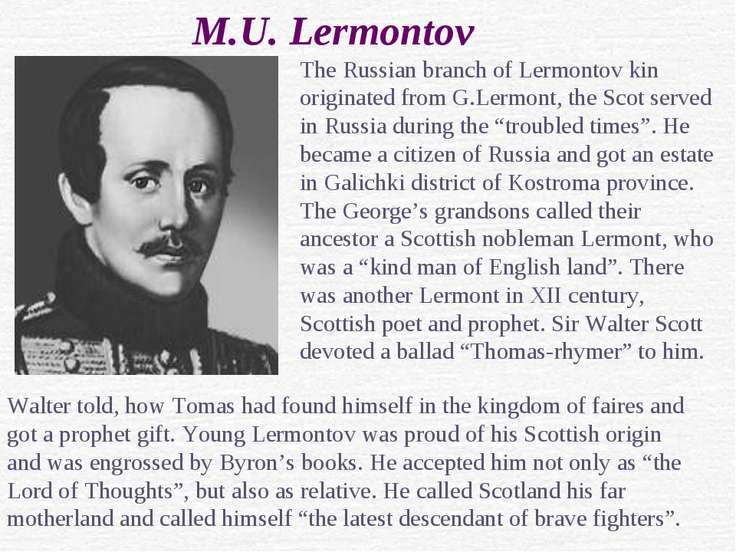 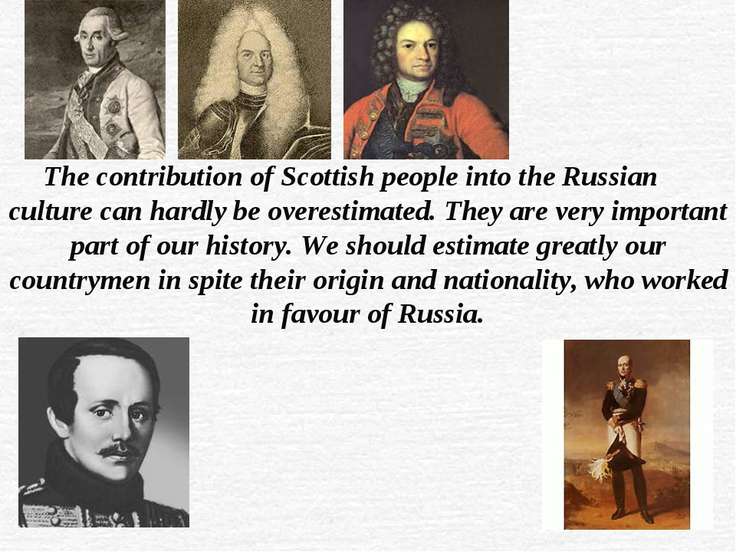 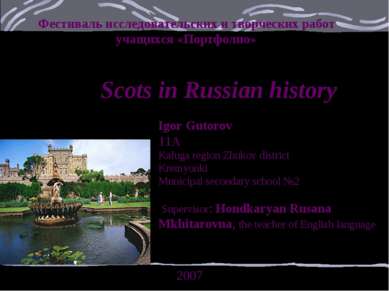 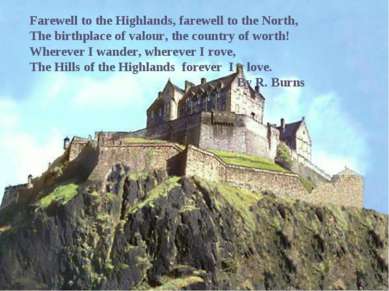 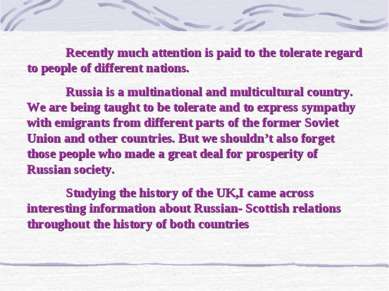 Recently much attention is paid to the tolerate regard to people of different nations. Russia is a multinational and multicultural country. We are being taught to be tolerate and to express sympathy with emigrants from different parts of the former Soviet Union and other countries. But we shouldn’t also forget those people who made a great deal for prosperity of Russian society. Studying the history of the UK,I came across interesting information about Russian- Scottish relations throughout the history of both countries 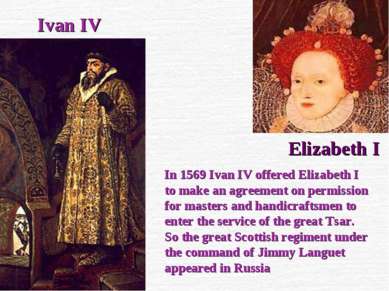 Ivan IV Elizabeth I In 1569 Ivan IV offered Elizabeth I to make an agreement on permission for masters and handicraftsmen to enter the service of the great Tsar. So the great Scottish regiment under the command of Jimmy Languet appeared in Russia 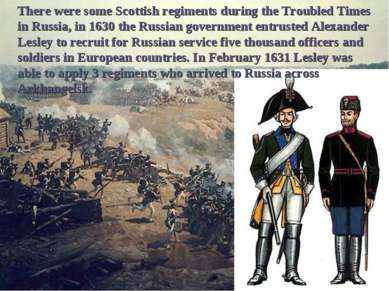 There were some Scottish regiments during the Troubled Times in Russia, in 1630 the Russian government entrusted Alexander Lesley to recruit for Russian service five thousand officers and soldiers in European countries. In February 1631 Lesley was able to apply 3 regiments who arrived to Russia across Arkhangelsk. 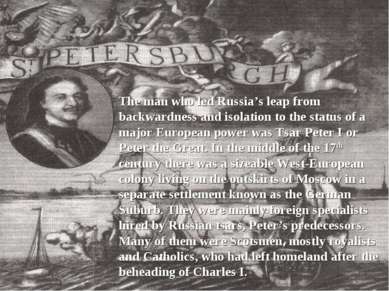 The man who led Russia’s leap from backwardness and isolation to the status of a major European power was Tsar Peter I or Peter the Great. In the middle of the 17th century there was a sizeable West-European colony living on the outskirts of Moscow in a separate settlement known as the German Suburb. They were mainly foreign specialists hired by Russian tsars, Peter’s predecessors. Many of them were Scotsmen, mostly royalists and Catholics, who had left homeland after the beheading of Charles I. 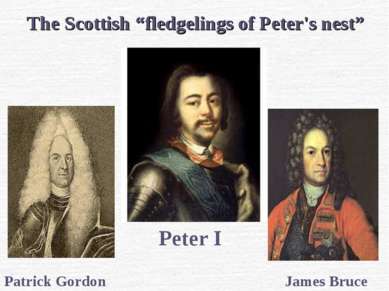 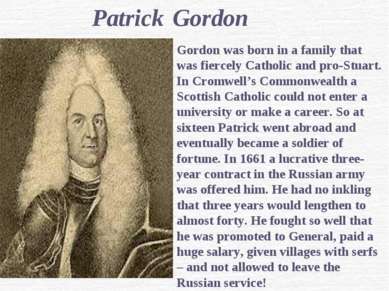 Patrick Gordon Gordon was born in a family that was fiercely Catholic and pro-Stuart. In Cromwell’s Commonwealth a Scottish Catholic could not enter a university or make a career. So at sixteen Patrick went abroad and eventually became a soldier of fortune. In 1661 a lucrative three-year contract in the Russian army was offered him. He had no inkling that three years would lengthen to almost forty. He fought so well that he was promoted to General, paid a huge salary, given villages with serfs – and not allowed to leave the Russian service! 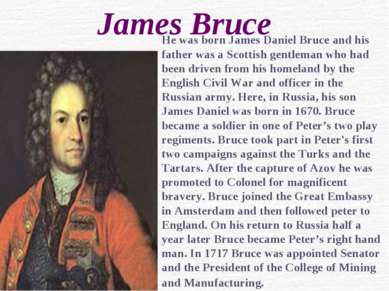 James Bruce He was born James Daniel Bruce and his father was a Scottish gentleman who had been driven from his homeland by the English Civil War and officer in the Russian army. Here, in Russia, his son James Daniel was born in 1670. Bruce became a soldier in one of Peter’s two play regiments. Bruce took part in Peter's first two campaigns against the Turks and the Tartars. After the capture of Azov he was promoted to Colonel for magnificent bravery. Bruce joined the Great Embassy in Amsterdam and then followed peter to England. On his return to Russia half a year later Bruce became Peter’s right hand man. In 1717 Bruce was appointed Senator and the President of the College of Mining and Manufacturing. 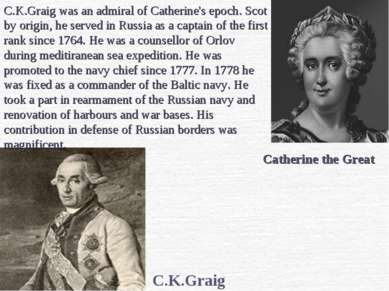 C.K.Graig Catherine the Great C.K.Graig was an admiral of Catherine's epoch. Scot by origin, he served in Russia as a captain of the first rank since 1764. He was a counsellor of Orlov during meditiranean sea expedition. He was promoted to the navy chief since 1777. In 1778 he was fixed as a commander of the Baltic navy. He took a part in rearmament of the Russian navy and renovation of harbours and war bases. His contribution in defense of Russian borders was magnificent. 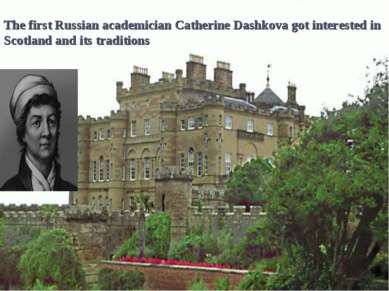 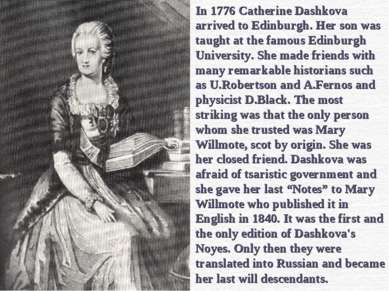 In 1776 Catherine Dashkova arrived to Edinburgh. Her son was taught at the famous Edinburgh University. She made friends with many remarkable historians such as U.Robertson and A.Fernos and physicist D.Black. The most striking was that the only person whom she trusted was Mary Willmote, scot by origin. She was her closed friend. Dashkova was afraid of tsaristic government and she gave her last “Notes” to Mary Willmote who published it in English in 1840. It was the first and the only edition of Dashkova's Noyes. Only then they were translated into Russian and became her last will descendants. 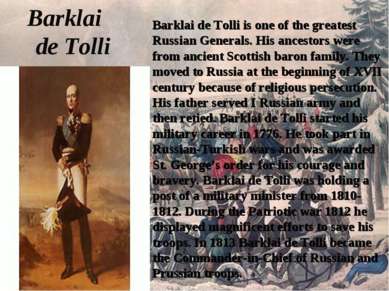 Barklai de Tolli Barklai de Tolli is one of the greatest Russian Generals. His ancestors were from ancient Scottish baron family. They moved to Russia at the beginning of XVII century because of religious persecution. His father served I Russian army and then retied. Barklai de Tolli started his military career in 1776. He took part in Russian-Turkish wars and was awarded St. George’s order for his courage and bravery. Barklai de Tolli was holding a post of a military minister from 1810-1812. During the Patriotic war 1812 he displayed magnificent efforts to save his troops. In 1813 Barklai de Tolli became the Commander-in-Chief of Russian and Prussian troops. 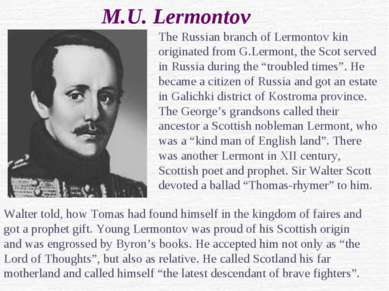 M.U. Lermontov The Russian branch of Lermontov kin originated from G.Lermont, the Scot served in Russia during the “troubled times”. He became a citizen of Russia and got an estate in Galichki district of Kostroma province. The George’s grandsons called their ancestor a Scottish nobleman Lermont, who was a “kind man of English land”. There was another Lermont in XII century, Scottish poet and prophet. Sir Walter Scott devoted a ballad “Thomas-rhymer” to him. Walter told, how Tomas had found himself in the kingdom of faires and got a prophet gift. Young Lermontov was proud of his Scottish origin and was engrossed by Byron’s books. He accepted him not only as “the Lord of Thoughts”, but also as relative. He called Scotland his far motherland and called himself “the latest descendant of brave fighters”. 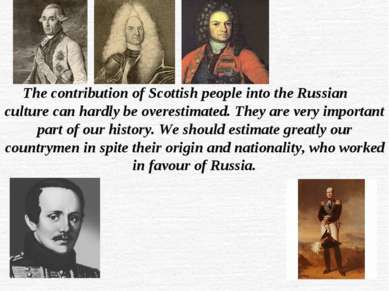 The contribution of Scottish people into the Russian culture can hardly be overestimated. They are very important part of our history. We should estimate greatly our countrymen in spite their origin and nationality, who worked in favour of Russia.