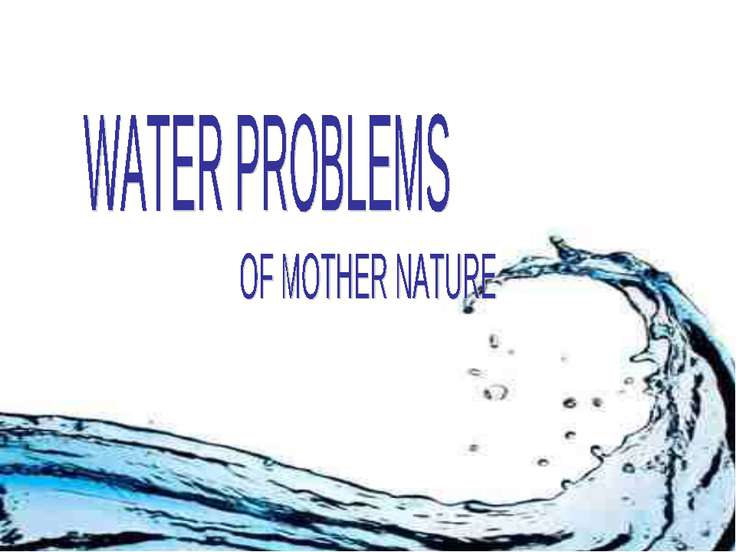 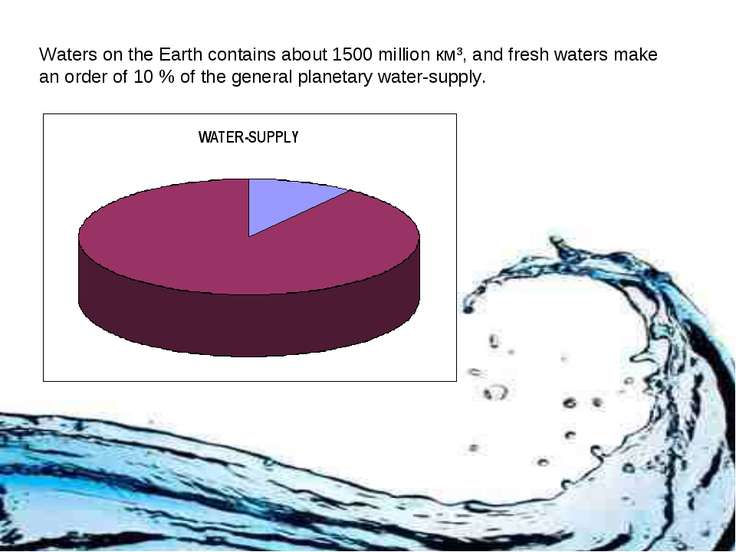 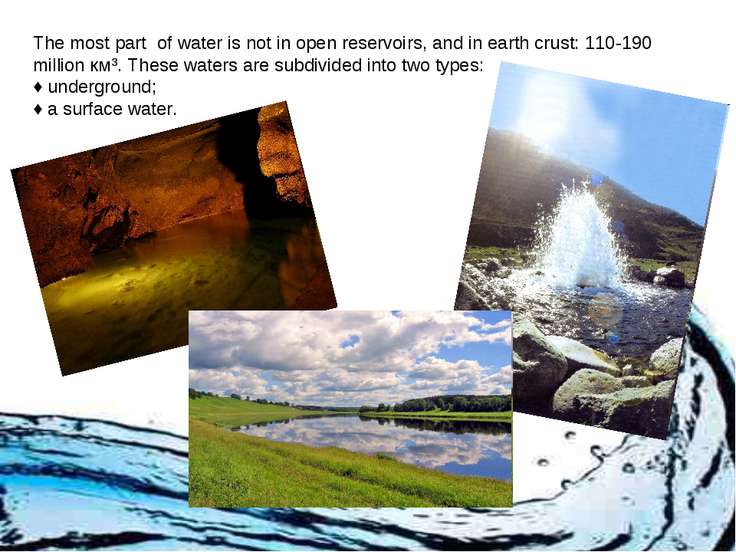 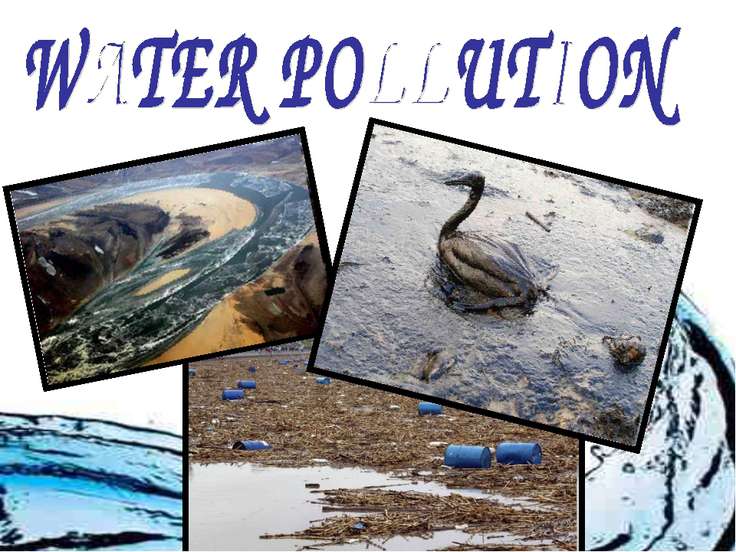 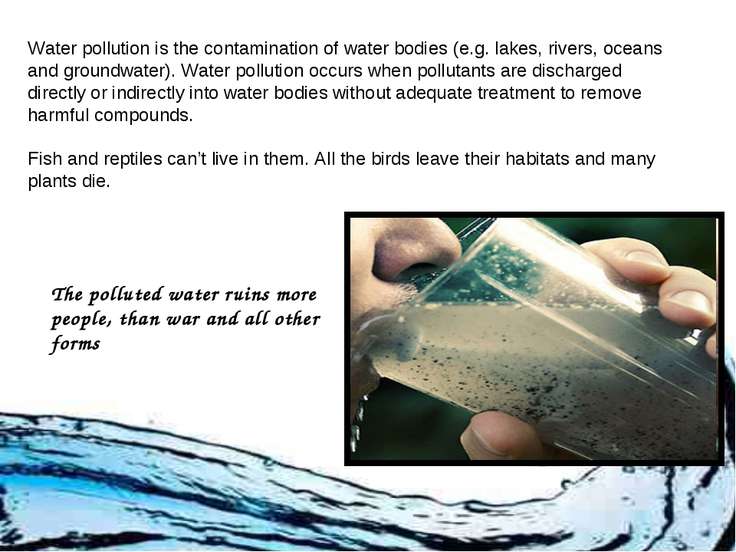 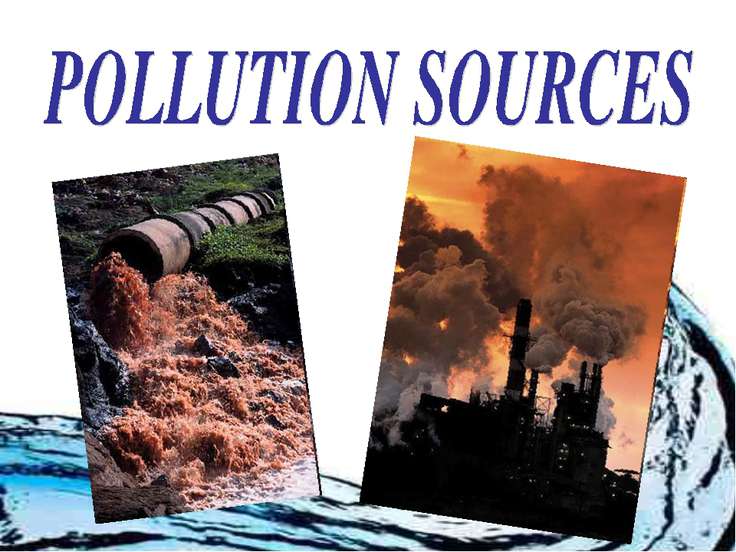 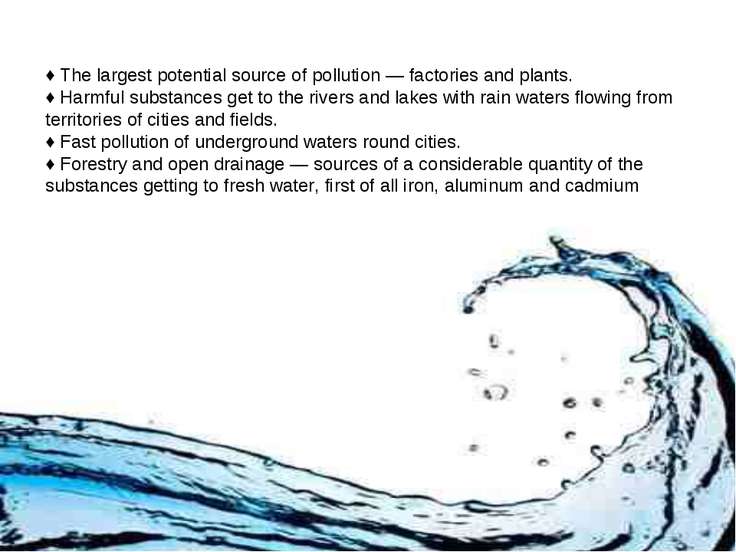 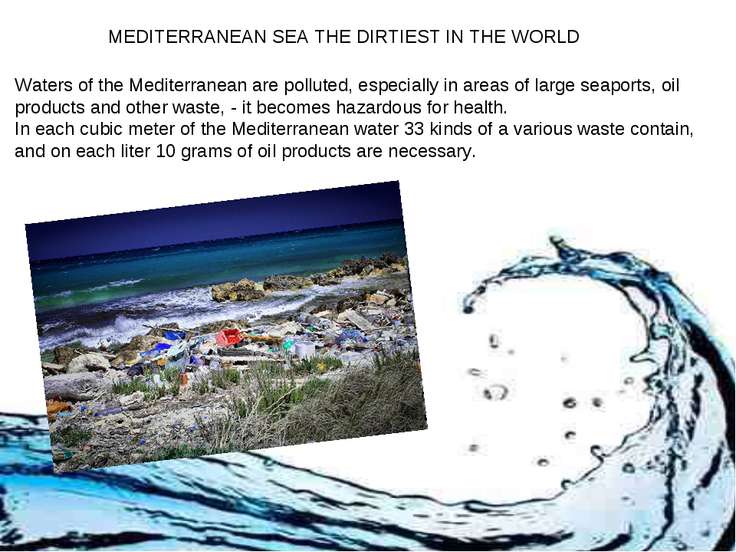 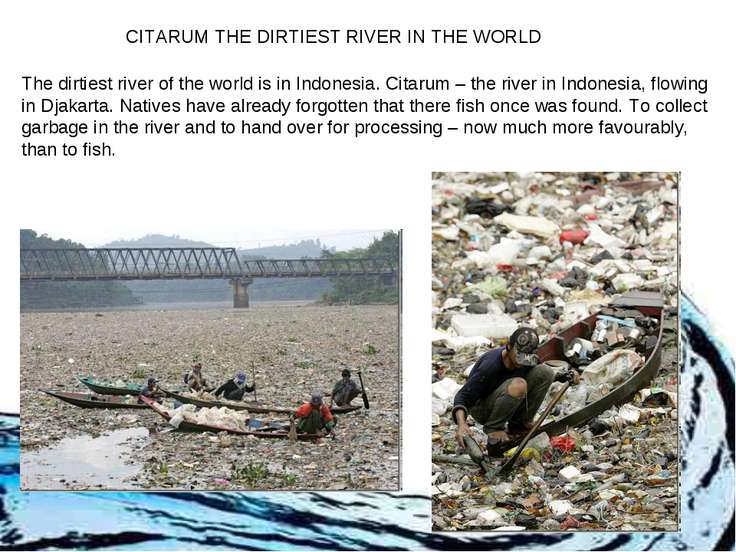 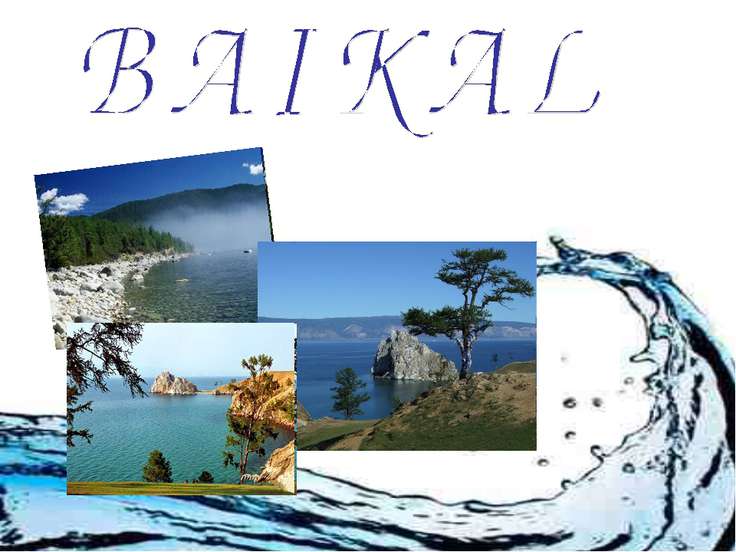 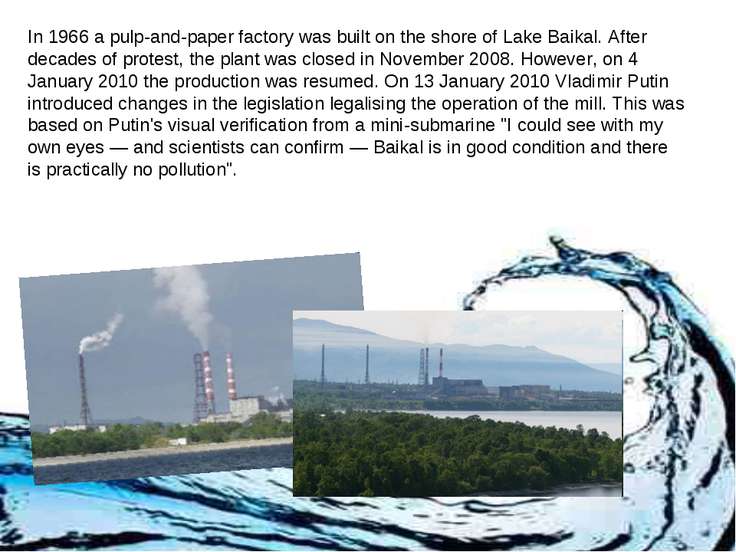 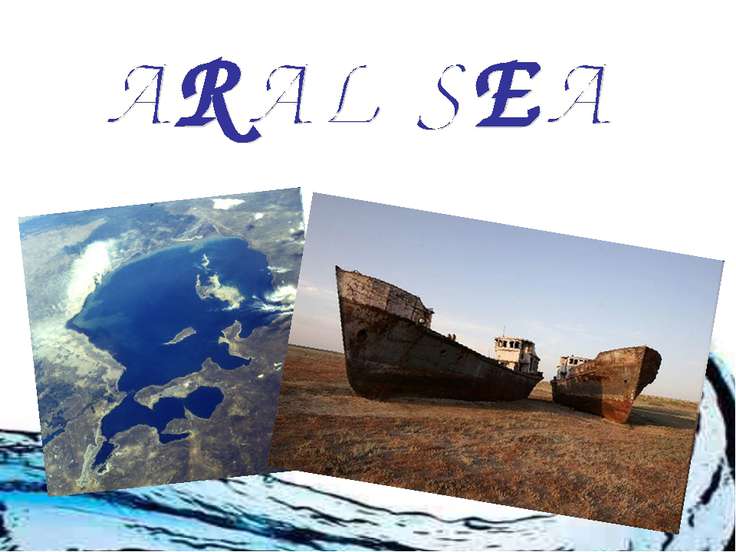 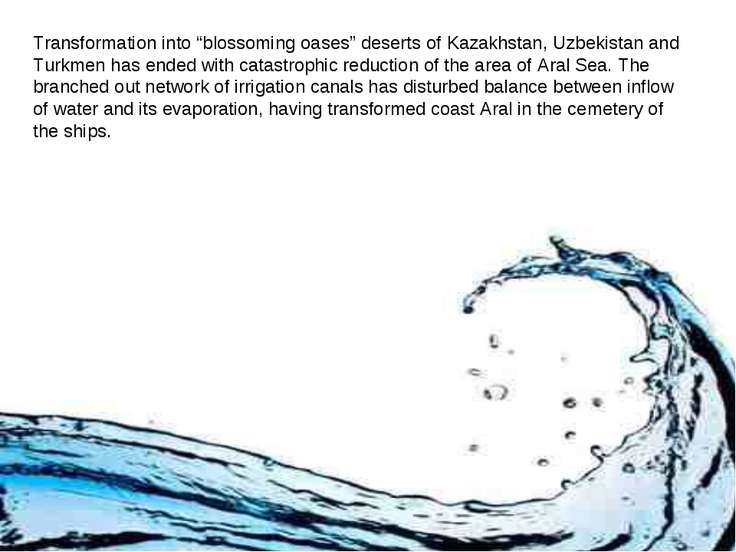 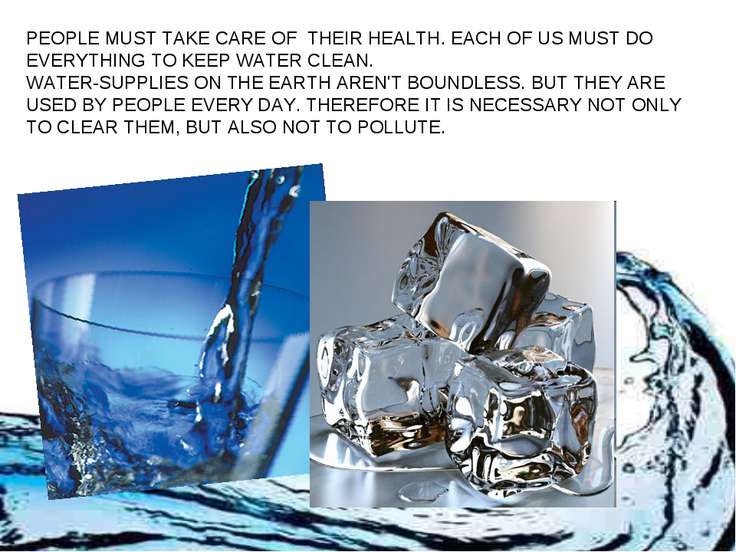 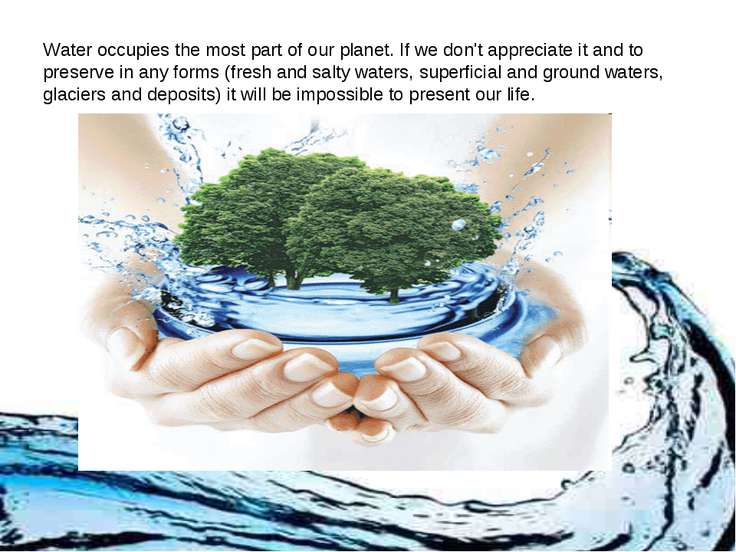 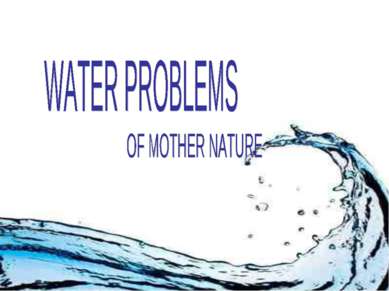 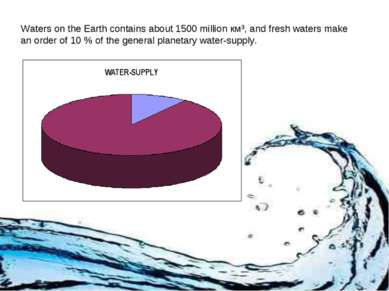 Waters on the Earth contains about 1500 million км³, and fresh waters make an order of 10 % of the general planetary water-supply. 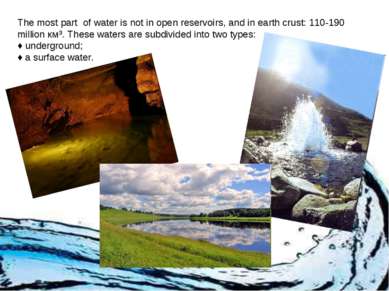 The most part of water is not in open reservoirs, and in earth crust: 110-190 million км³. These waters are subdivided into two types: ♦ underground; ♦ a surface water. 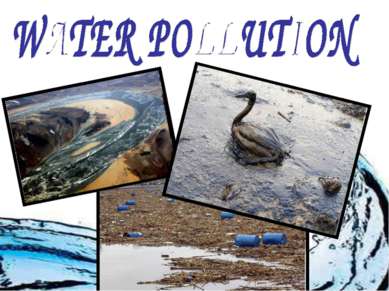 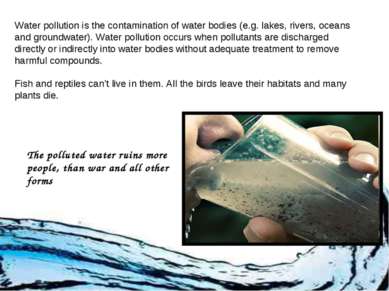 Water pollution is the contamination of water bodies (e.g. lakes, rivers, oceans and groundwater). Water pollution occurs when pollutants are discharged directly or indirectly into water bodies without adequate treatment to remove harmful compounds. Fish and reptiles can’t live in them. All the birds leave their habitats and many plants die. The polluted water ruins more people, than war and all other forms 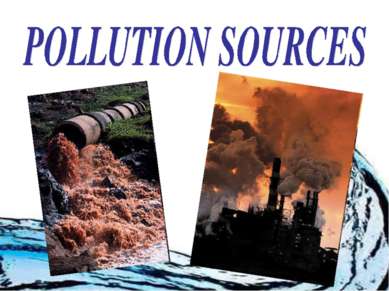 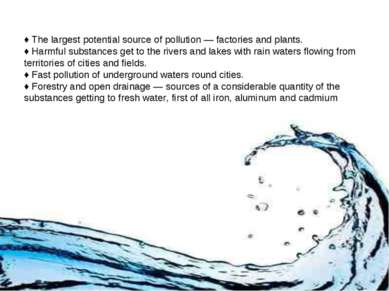 ♦ The largest potential source of pollution — factories and plants. ♦ Harmful substances get to the rivers and lakes with rain waters flowing from territories of cities and fields. ♦ Fast pollution of underground waters round cities. ♦ Forestry and open drainage — sources of a considerable quantity of the substances getting to fresh water, first of all iron, aluminum and cadmium 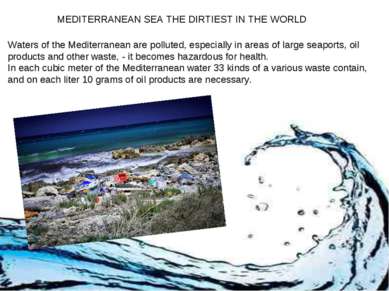 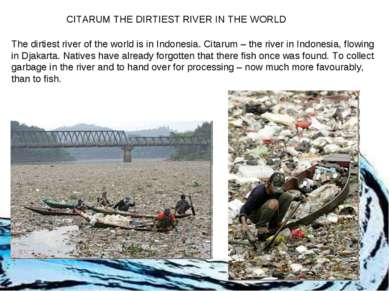 The dirtiest river of the world is in Indonesia. Citarum – the river in Indonesia, flowing in Djakarta. Natives have already forgotten that there fish once was found. To collect garbage in the river and to hand over for processing – now much more favourably, than to fish. CITARUM THE DIRTIEST RIVER IN THE WORLD 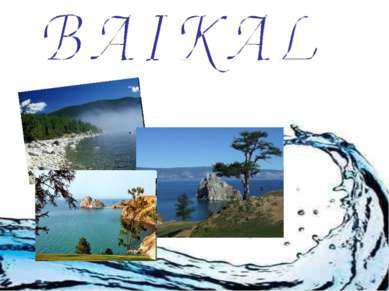 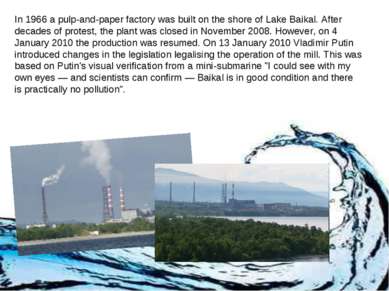 In 1966 a pulp-and-paper factory was built on the shore of Lake Baikal. After decades of protest, the plant was closed in November 2008. However, on 4 January 2010 the production was resumed. On 13 January 2010 Vladimir Putin introduced changes in the legislation legalising the operation of the mill. This was based on Putin's visual verification from a mini-submarine "I could see with my own eyes — and scientists can confirm — Baikal is in good condition and there is practically no pollution". 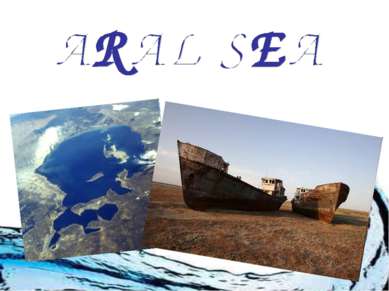 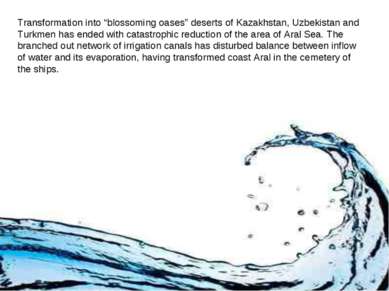 Transformation into “blossoming oases” deserts of Kazakhstan, Uzbekistan and Turkmen has ended with catastrophic reduction of the area of Aral Sea. The branched out network of irrigation canals has disturbed balance between inflow of water and its evaporation, having transformed coast Aral in the cemetery of the ships. 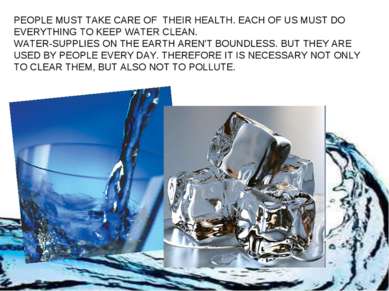 PEOPLE MUST TAKE CARE OF THEIR HEALTH. EACH OF US MUST DO EVERYTHING TO KEEP WATER CLEAN. WATER-SUPPLIES ON THE EARTH AREN'T BOUNDLESS. BUT THEY ARE USED BY PEOPLE EVERY DAY. THEREFORE IT IS NECESSARY NOT ONLY TO CLEAR THEM, BUT ALSO NOT TO POLLUTE. 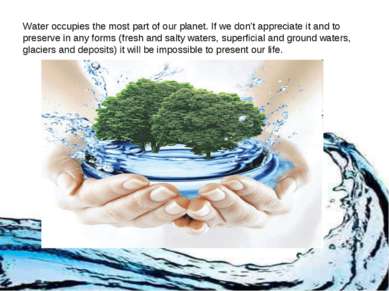 Water occupies the most part of our planet. If we don't appreciate it and to preserve in any forms (fresh and salty waters, superficial and ground waters, glaciers and deposits) it will be impossible to present our life.