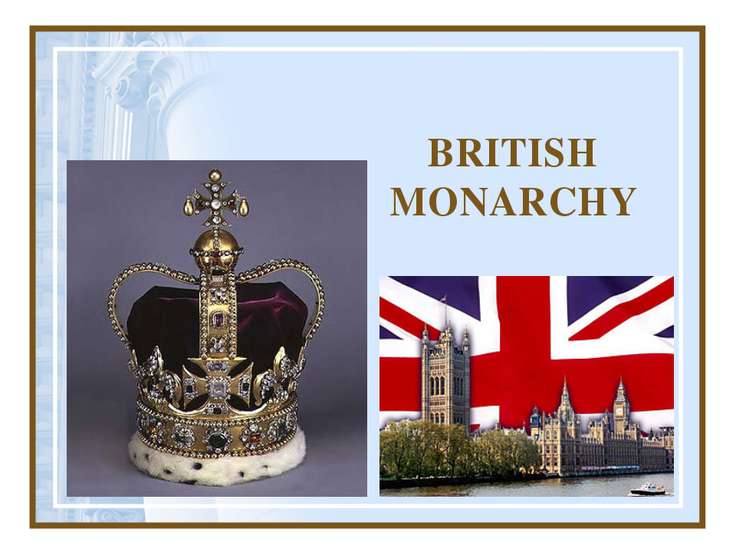 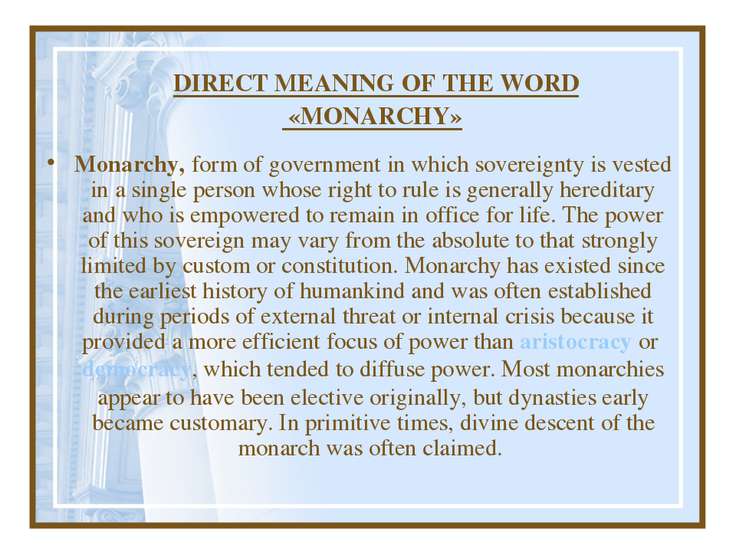 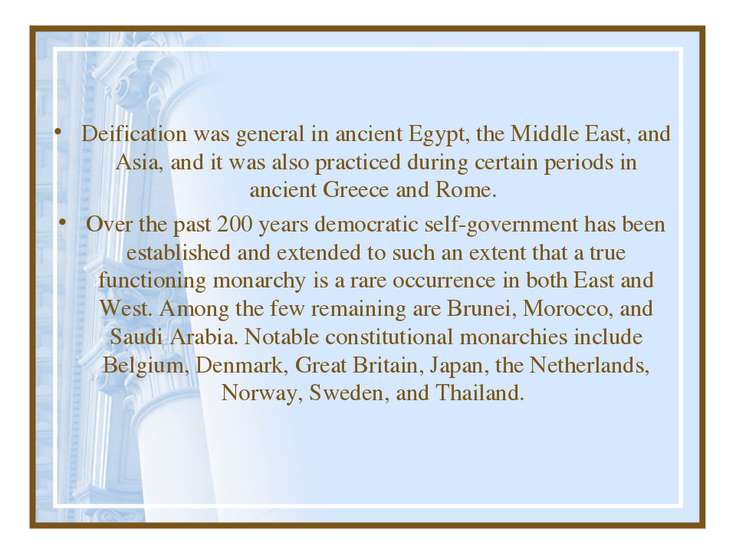 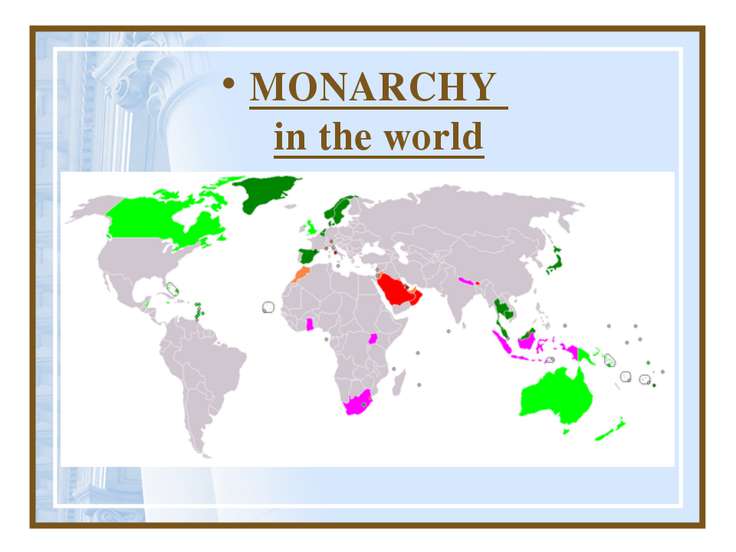 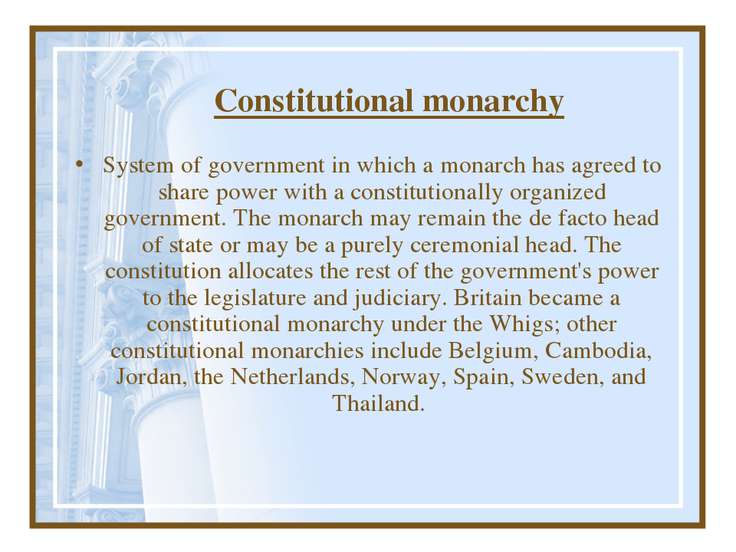 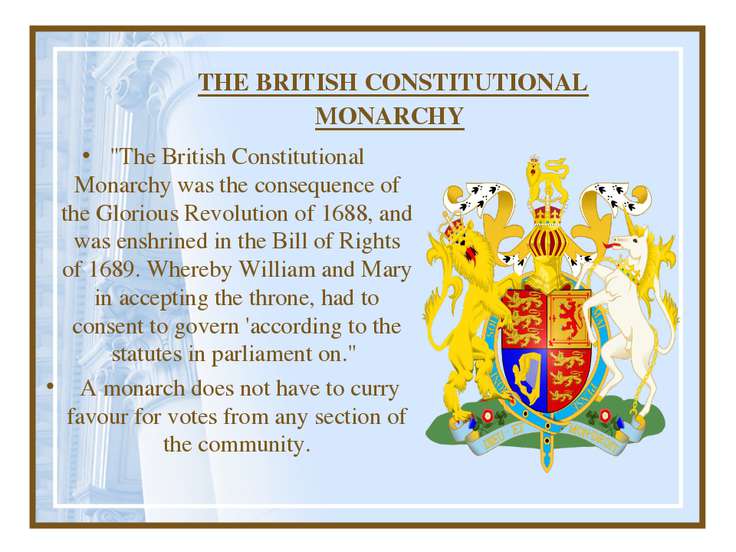 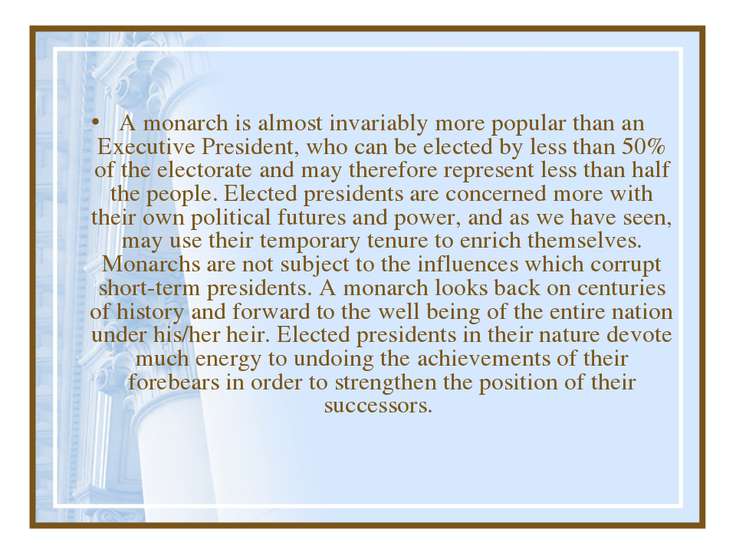 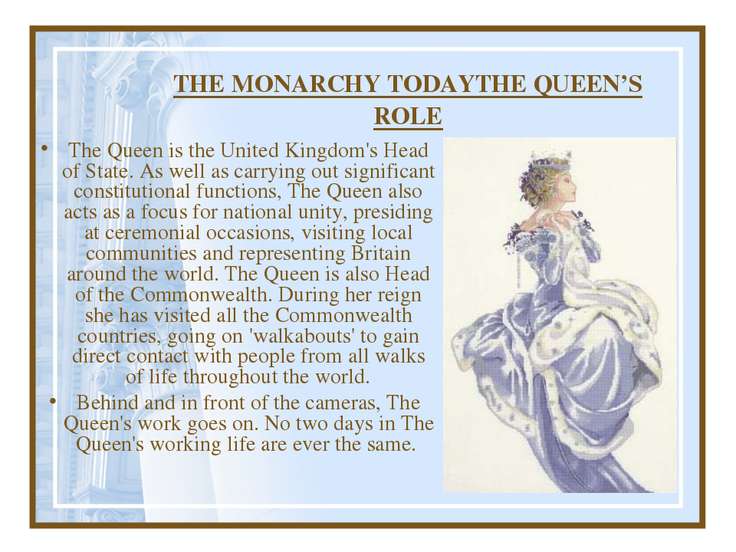 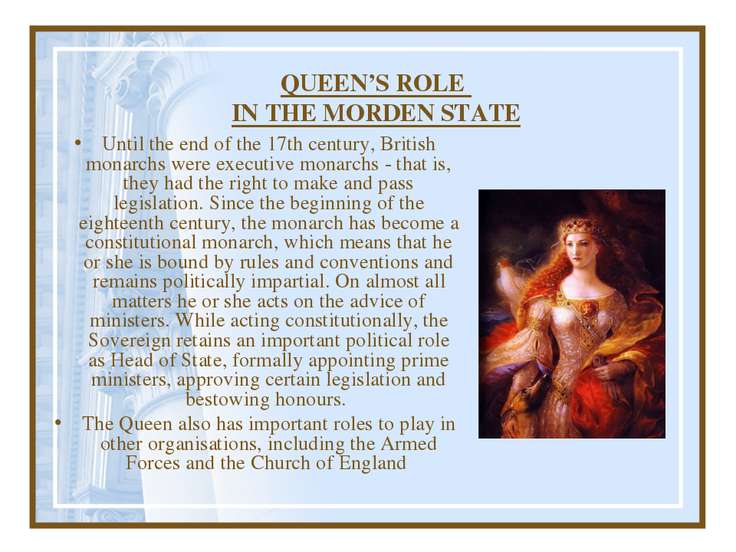 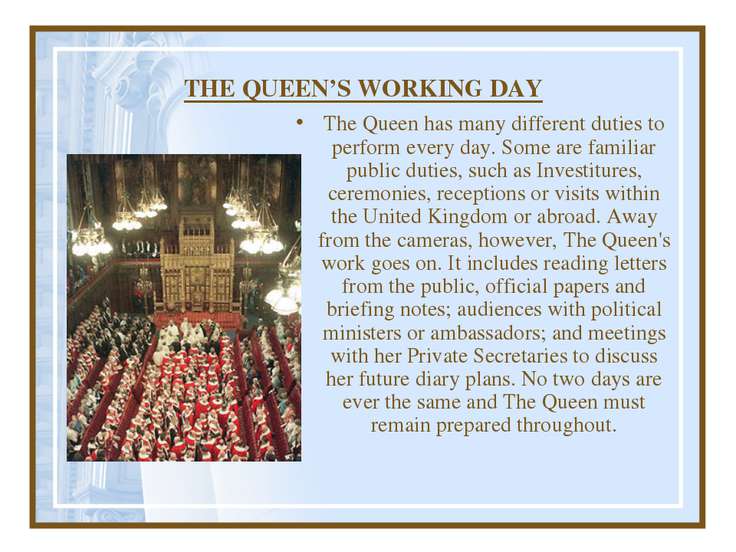 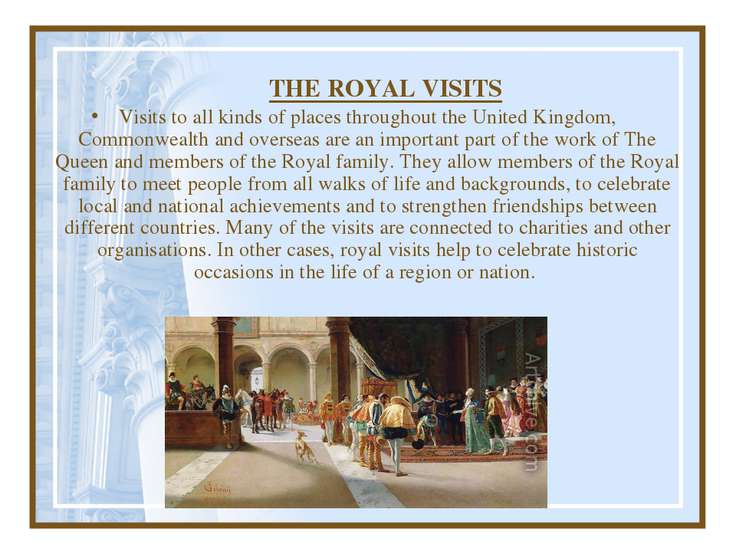 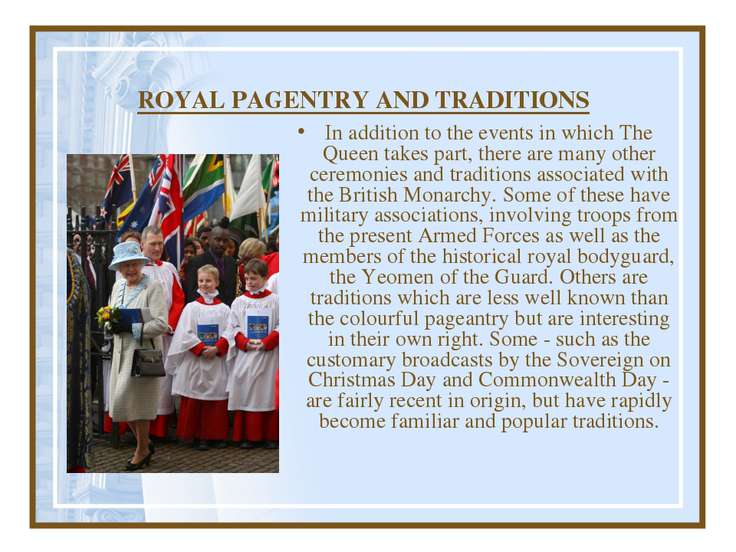 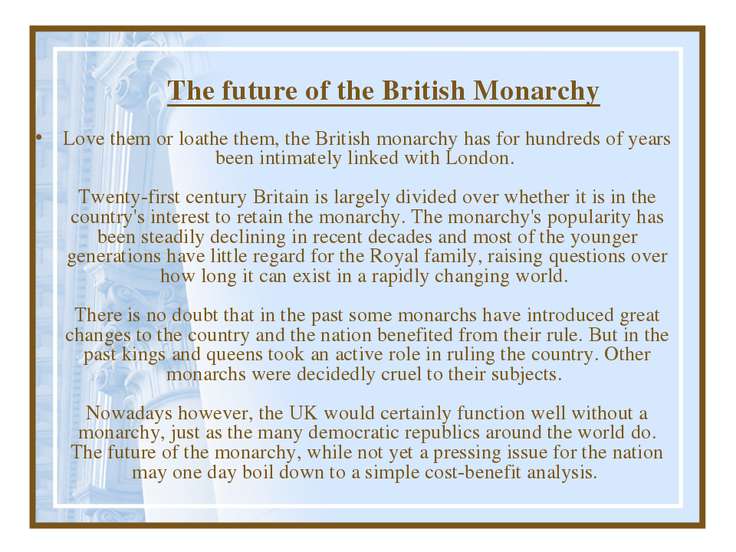 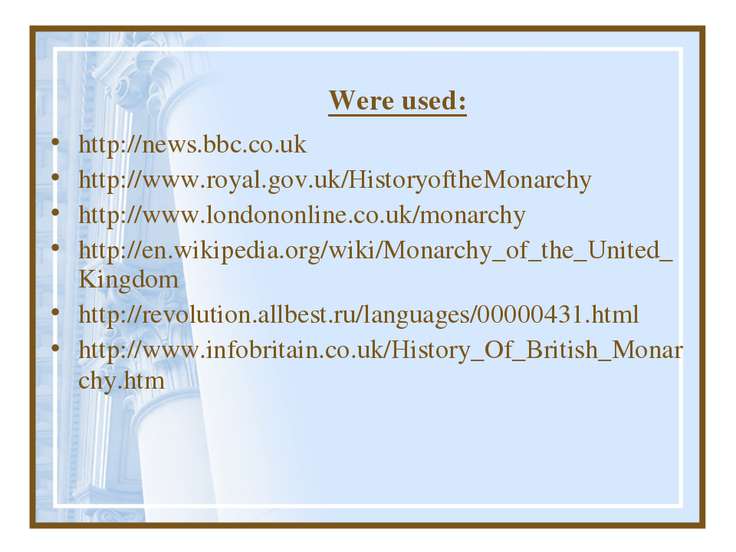 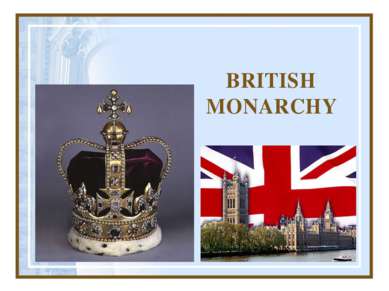 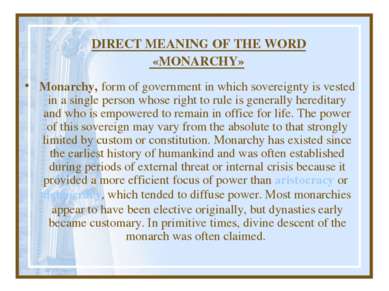 DIRECT MEANING OF THE WORD «MONARCHY» Monarchy, form of government in which sovereignty is vested in a single person whose right to rule is generally hereditary and who is empowered to remain in office for life. The power of this sovereign may vary from the absolute to that strongly limited by custom or constitution. Monarchy has existed since the earliest history of humankind and was often established during periods of external threat or internal crisis because it provided a more efficient focus of power than aristocracy or democracy, which tended to diffuse power. Most monarchies appear to have been elective originally, but dynasties early became customary. In primitive times, divine descent of the monarch was often claimed. 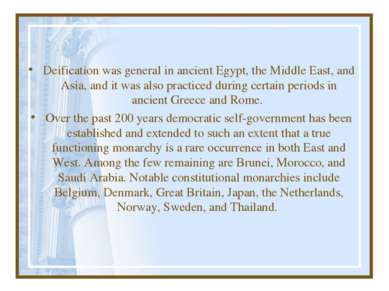 Deification was general in ancient Egypt, the Middle East, and Asia, and it was also practiced during certain periods in ancient Greece and Rome. Over the past 200 years democratic self-government has been established and extended to such an extent that a true functioning monarchy is a rare occurrence in both East and West. Among the few remaining are Brunei, Morocco, and Saudi Arabia. Notable constitutional monarchies include Belgium, Denmark, Great Britain, Japan, the Netherlands, Norway, Sweden, and Thailand. 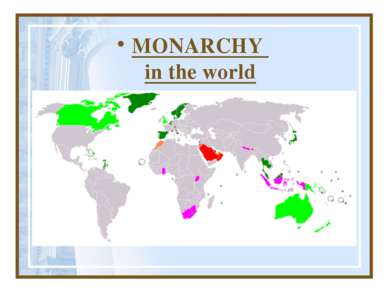 MONARCHY in the world 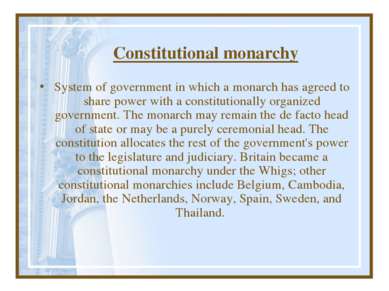 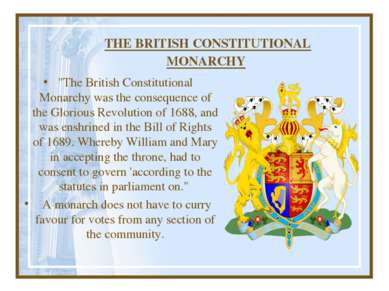 THE BRITISH CONSTITUTIONAL MONARCHY "The British Constitutional Monarchy was the consequence of the Glorious Revolution of 1688, and was enshrined in the Bill of Rights of 1689. Whereby William and Mary in accepting the throne, had to consent to govern 'according to the statutes in parliament on."  A monarch does not have to curry favour for votes from any section of the community. 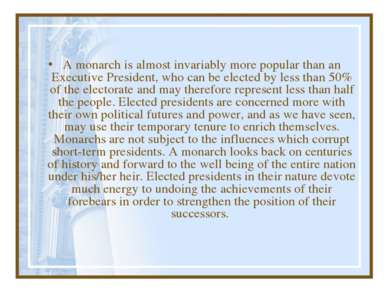 A monarch is almost invariably more popular than an Executive President, who can be elected by less than 50% of the electorate and may therefore represent less than half the people. Elected presidents are concerned more with their own political futures and power, and as we have seen, may use their temporary tenure to enrich themselves. Monarchs are not subject to the influences which corrupt short-term presidents. A monarch looks back on centuries of history and forward to the well being of the entire nation under his/her heir. Elected presidents in their nature devote much energy to undoing the achievements of their forebears in order to strengthen the position of their successors. 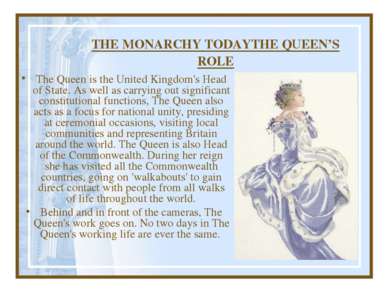 THE MONARCHY TODAY THE QUEEN’S ROLE The Queen is the United Kingdom's Head of State. As well as carrying out significant constitutional functions, The Queen also acts as a focus for national unity, presiding at ceremonial occasions, visiting local communities and representing Britain around the world. The Queen is also Head of the Commonwealth. During her reign she has visited all the Commonwealth countries, going on 'walkabouts' to gain direct contact with people from all walks of life throughout the world. Behind and in front of the cameras, The Queen's work goes on. No two days in The Queen's working life are ever the same. 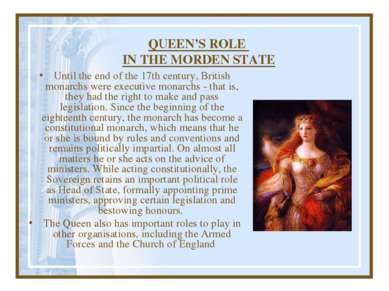 QUEEN’S ROLE IN THE MORDEN STATE Until the end of the 17th century, British monarchs were executive monarchs - that is, they had the right to make and pass legislation. Since the beginning of the eighteenth century, the monarch has become a constitutional monarch, which means that he or she is bound by rules and conventions and remains politically impartial. On almost all matters he or she acts on the advice of ministers. While acting constitutionally, the Sovereign retains an important political role as Head of State, formally appointing prime ministers, approving certain legislation and bestowing honours. The Queen also has important roles to play in other organisations, including the Armed Forces and the Church of England 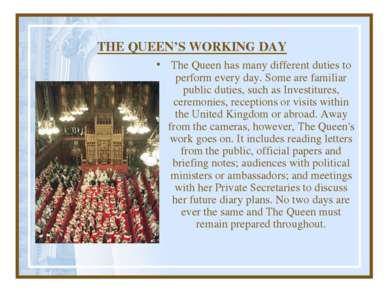 THE QUEEN’S WORKING DAY The Queen has many different duties to perform every day. Some are familiar public duties, such as Investitures, ceremonies, receptions or visits within the United Kingdom or abroad. Away from the cameras, however, The Queen's work goes on. It includes reading letters from the public, official papers and briefing notes; audiences with political ministers or ambassadors; and meetings with her Private Secretaries to discuss her future diary plans. No two days are ever the same and The Queen must remain prepared throughout. 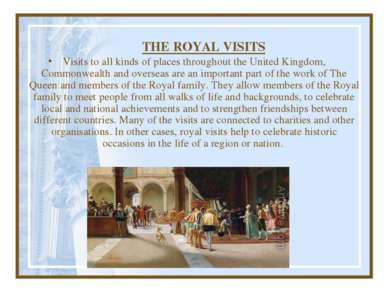 THE ROYAL VISITS Visits to all kinds of places throughout the United Kingdom, Commonwealth and overseas are an important part of the work of The Queen and members of the Royal family. They allow members of the Royal family to meet people from all walks of life and backgrounds, to celebrate local and national achievements and to strengthen friendships between different countries. Many of the visits are connected to charities and other organisations. In other cases, royal visits help to celebrate historic occasions in the life of a region or nation. 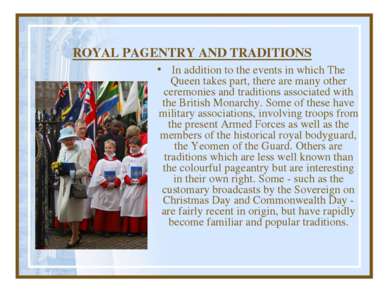 ROYAL PAGENTRY AND TRADITIONS In addition to the events in which The Queen takes part, there are many other ceremonies and traditions associated with the British Monarchy. Some of these have military associations, involving troops from the present Armed Forces as well as the members of the historical royal bodyguard, the Yeomen of the Guard. Others are traditions which are less well known than the colourful pageantry but are interesting in their own right. Some - such as the customary broadcasts by the Sovereign on Christmas Day and Commonwealth Day - are fairly recent in origin, but have rapidly become familiar and popular traditions. 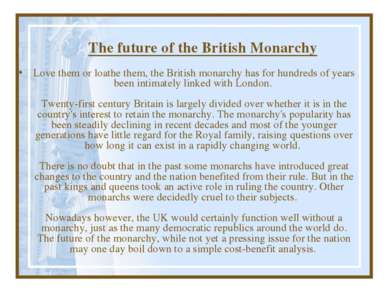 The future of the British Monarchy Love them or loathe them, the British monarchy has for hundreds of years been intimately linked with London. Twenty-first century Britain is largely divided over whether it is in the country's interest to retain the monarchy. The monarchy's popularity has been steadily declining in recent decades and most of the younger generations have little regard for the Royal family, raising questions over how long it can exist in a rapidly changing world. There is no doubt that in the past some monarchs have introduced great changes to the country and the nation benefited from their rule. But in the past kings and queens took an active role in ruling the country. Other monarchs were decidedly cruel to their subjects. Nowadays however, the UK would certainly function well without a monarchy, just as the many democratic republics around the world do. The future of the monarchy, while not yet a pressing issue for the nation may one day boil down to a simple cost-benefit analysis. 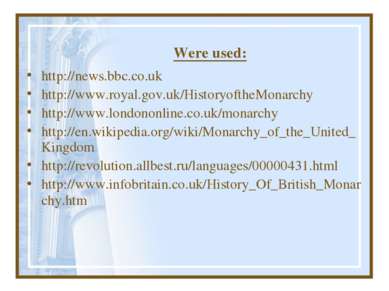